HOMESTEAD PROPERTY TAX EXEMPTION
March 31, 2020 is the last date to apply for Homestead Exemption for the upcoming tax bill.
You can get a form from our website or come into the Town Office to one.

ABSENTEE BALLOTS
Are available at the Owls Head Town office until February 27, 2020.
Click here to view

The Cemetery Committee is looking for new members. Please contact (594-7434) the Owls Head Town Office if you are interested.

The first installment is due and payable October 8, 2019 and the interest will be charged at 8.00% annually on all accounts unpaid November 8, 2019.

The Town has appointed, William Demmons as the new Animal Control Officer. His phone number is 207-542-3057.

The Cemetery Committee is looking for new members. Please contact (594-7434) the Owls Head Town Office if you are interested.

There are unidentified veterans in the Town's cemeteries and the Cemetery Committee would appreciate your help finding them. If you have a relative who is a veteran or know of a veteran who is buried in one of the Town’s cemeteries who doesn’t have a veteran’s marker or whose headstone doesn’t have veteran identification, please notify William Gay at 594-2302 and the Cemetery Committee will make sure that these veterans will be recognized in the future. They’ve earned that honor and respect.

Open Tuesday, Wednesday, Thursday and Saturday, 8 AM to 4 PM
Call 594-0748 for questions or winter storm closings 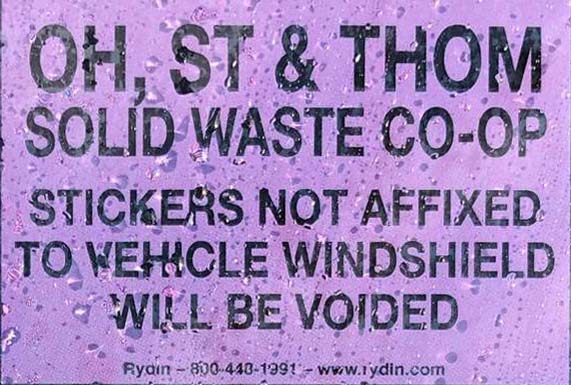 A current Purple sticker displayed is required in order to dump.

The decision to implement the policy for the sale of dump stickers for the Transfer Station on Buttermilk Lane in Thomaston did not come easily. Representatives worked on this for the better part of a year in public meetings of the Three-Town Solid Waste Corporation Board of Directors at which residents from all three towns, both full time and part time, attended and asked questions, offered opinions, and made complaints about the proposed policy. The board, after many months of deliberation, settled on a policy that is strong enough to eliminate the use of the transfer station by non-residents, while keeping the costs to a minimum. Please keep in mind that the transfer station is a project managed by three separate towns that saw the wisdom of entering into an inter-local agreement to benefit the taxpayers of all three towns. No system is perfect. But one policy, fairly administered by the six representatives [two from each town], provides the employees of the transfer station the direction they need to protect the investment and trust of the taxpayers. Please keep in mind that the $15 fee for a sticker is for two (2) years – 24 months; 104 weeks. Any vehicle that enters the transfer station for the purpose of depositing trash, mixed solid waste, cardboard, metal, and single stream recyclables is required to display a valid sticker on the interior driver side windshield of said vehicle. For many years, the use of a single, free-floating sticker from one vehicle to another was the norm in many households, but no more. Because of a number of instances of misuse over the years, a policy was created to control costs of transferring waste to EcoMaine and other destinations for the majority of the residents of the three towns. Under the new policy, everyone who is a resident of either Owls Head, South Thomaston, or Thomaston who uses the transfer station will pay 14.4 cents per week [the cost of a sticker for two (2) years] for the privilege of using the transfer station. One alternative is to engage the services of a contract residential hauler. The cans into which we deposit our waste come with a price each time they are trucked out of the transfer station. It is in everyone’s interest to do what we can to control those costs.

Cash or check only